Who is St. Scholastica? 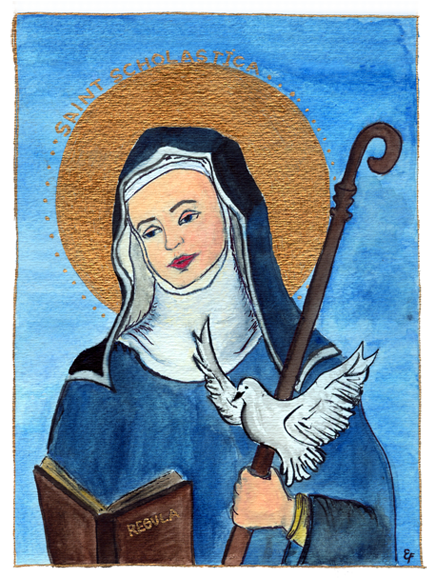 
The Benedictine motto ora et labora (pray and work) became a real joy for the young abbess, for she had practiced it since childhood. She found it the best way to keep her mind occupied with God even though her duties as abbess kept her busy most of the day. Pope Gregory explained that, although Benedict had set out a rule of life for these holy women, it was Scholastica’s duty to see that they kept it faithfully, cheerfully and regarded it as the best means for their sanctification.

Each year, Benedict and Scholastica met to discuss their way of life and the various spiritual challenges in the two religious houses. Since women were not allowed to enter his monastery, Benedict and a few companions met her in the guest house at Monte Casino. One day when Scholastica was very ill, her brother came to visit her at the convent. They spent the day singing psalms and speaking about the spiritual life, its compensations and challenges. When evening came, they sat down to supper and continued the conversation until quite late. Strict orders of the monastery only allowed one day for a monk to visit his family and never allowed him to stay away overnight.

After a delightful day of visiting, Scholastica asked her brother to stay the night since she was afraid that she would not live until his next visit. Benedict, an obedient monk, would not hear of such a thing. Legend has it that Scholastica folded her hands in prayer. When she looked up a minute later, lightning flashed in the sky, thunder roared ominously, and such a downpour of rain began that Benedict and his monks could not safely leave the house. Realizing what had happened, Benedict reproached her: "What have you done, my sister?” Scholastica answered simply, "I asked a favor of you, and you refused to listen to me. So I asked my God, and He, more generous than you, granted my request.” Once again Scholastica’s pleas won the favor she was seeking.


In the days that ensued, Scholastica became weaker and finally succumbed to the illness. While praying in his room, as Benedict looked toward the convent, he saw a white dove circling the building, finally disappearing into the blue. He interpreted this event to mean that his sister had died and her soul had gone to heaven. The white dove is a symbol of her purity.

St. Scholastica was outstanding for her simplicity and faith. She spoke to God directly, in reverent familiarity, without complex or elaborate ritual. As an abbess, St. Scholastica instilled in her sisters the necessity of living in accordance with the great Benedictine aim: "That in all things God may be glorified.” The Benedictine sisterhoods flourished under Scholastica and through the years to the present day. She demonstrated great faith and felt that it was more important to tend the needs of others than to follow a rule rigidly. St. Gregory the Great said of St. Scholastica, "She could do more because she loved more.”

The Benedictine values of prayer, work, study, community, reverence and respect are hallmarks of the life of St. Scholastica. She is indeed a role model to all of us who are part of the SSA family.
St. Scholastica Academy is a Catholic, all-girls, college-preparatory high school located in Covington, Louisiana. Founded in 1903, SSA perpetuates the Benedictine tradition of balancing prayer, work, study, and community in developing adolescent girls into Christian women grounded in the Gospel values of the Catholic faith. St. Scholastica Academy is a Catholic girls high school of the Archdiocese of New Orleans. As such it admits students of any race, color, national and ethnic origin to all the rights, privileges, programs, and activities available to students at its schools. It does not discriminate on the basis of race, color, national and ethnic origin in administration of educational policies, admissions policies, scholarship and loan programs, or athletic and other school-administered programs.